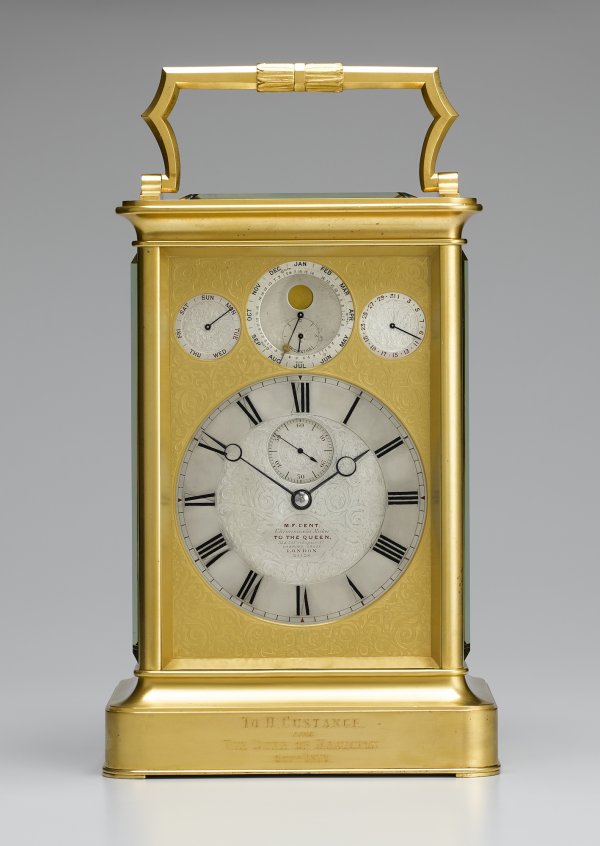 A rare and important giant chronometer carriage clock with perpetual calendar, equation of time and moon phase. Circa 1862

The 8 inch by 7 inch rectangular dial with gilt scroll engraved and chased mask, silvered dial with Roman numerals and sunken subsidiary seconds dial, the centre scroll engraved with cartouche signed M.F.DENT Chronometer Maker TO THE QUEEN 33 & 34 Cockspur St Charing Cross LONDON 24128. Blued steel Breguet hands. Silvered subsidiary dials above for the day of the week, Day of the month and the equation of time with moon phase indication and leap year.

The massive 5 pillar eight day three train fusee movement has a fourth train going barrel to drive the calendar work. Large spring detent platform escapement with blued steel helical balance spring to the bimetallic balance. Striking the quarters on a nest of eight bells and the hours on a blued steel gong, trip repeat function. The perpetual calendar mechanism, equation of time and moon phase behind the dial and between the dial and frontplate.

The gilt brass case with thick glass bevelled panels to the sides and top, pierced scrollwork panel to the rear with shuttered winding holes and setting apertures. Facetted folding handle , inscription to the base To H .Custance from the Duke of Hamilton Oct. 1879. Mahogany turntable base and numbered winding key.

Edward John Dent (1790-1853) went into partnership with John Roger Arnold at 84 Strand. In 1840 he set up on his own at 64 Strand and also at 28 and 33 Cockspur Street. He was granted the Royal Warrant as Chronometer Maker to the Queen in 1841. In 1852 Dent won the commission to make the great clock for the Houses of Parliament at Westminster but died in 1853 before it was completed. When Edward John Dent died in 1853 his business was split between his two stepsons who both adopted the surname Dent. Richard Edward Dent inherited the Cockspur Street business which passed to his wife, Marianna Frederica Dent, when he died in 1856. The business continued as M. F. Dent until 1920 when it merged with E. Dent & Co. Ltd.

This clock is accompanied by a first edition book written by Henry Custance, Riding recollections 1894